Painting of the Month 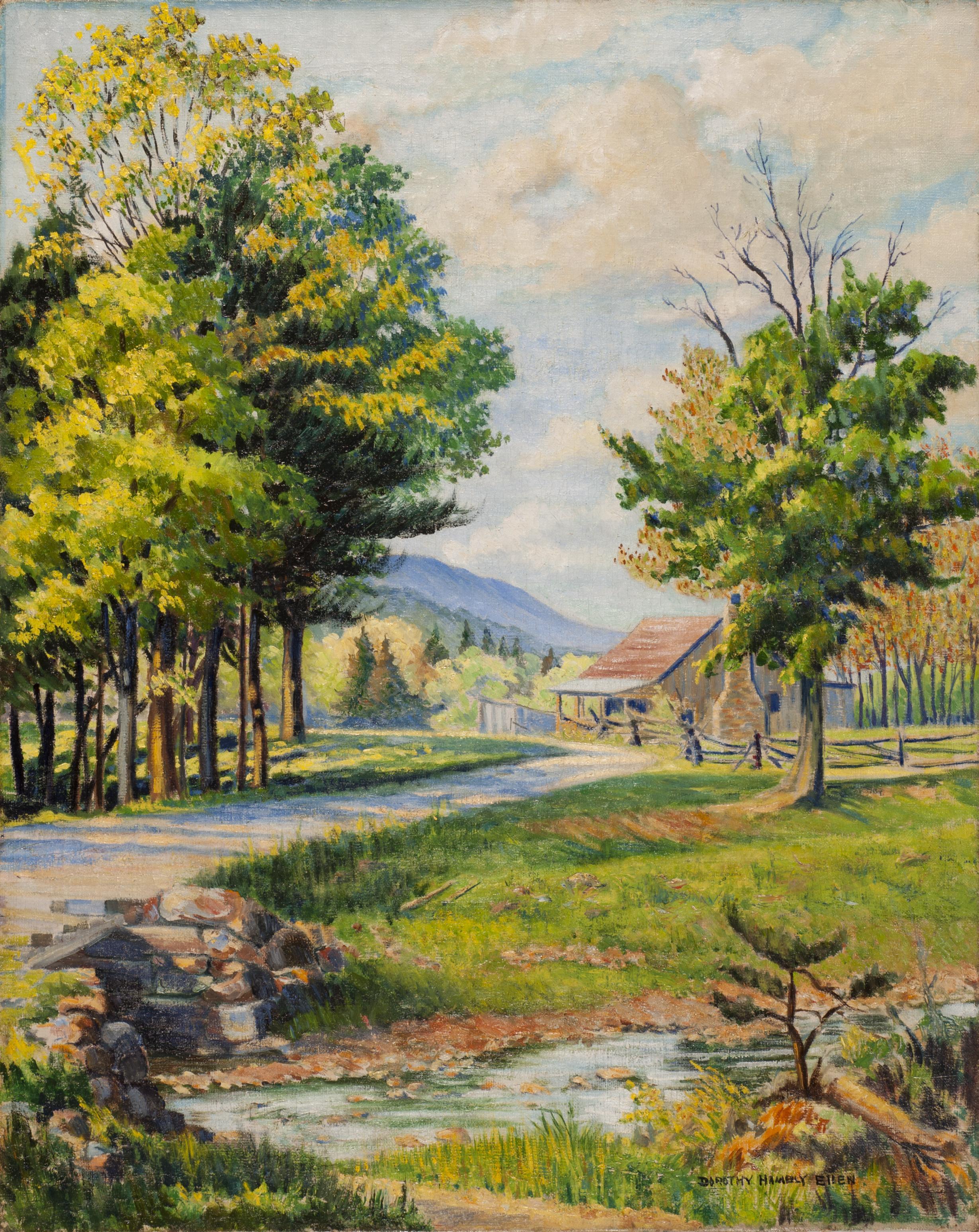 June Painting of the Month
Mill Creek Valley -- Pennsylvania
By Dorothy Hambly Ellen
Acquired 1939
Mill Creek Valley -- Pennsylvania is a bright impressionistic work painted with a total absence of black in the artist's palette.  The sunny scene is a hunting lodge near Standing Mountain in Huntingdon County,  The stream of the title crosses the foreground of the work and flows under the road that takes the viewer to the center of the picture.  Greens and blues prevail in the composition with only one touch of red placed on the lodge roof to draw attention there.  The balance and color combine to create a quiet setting. 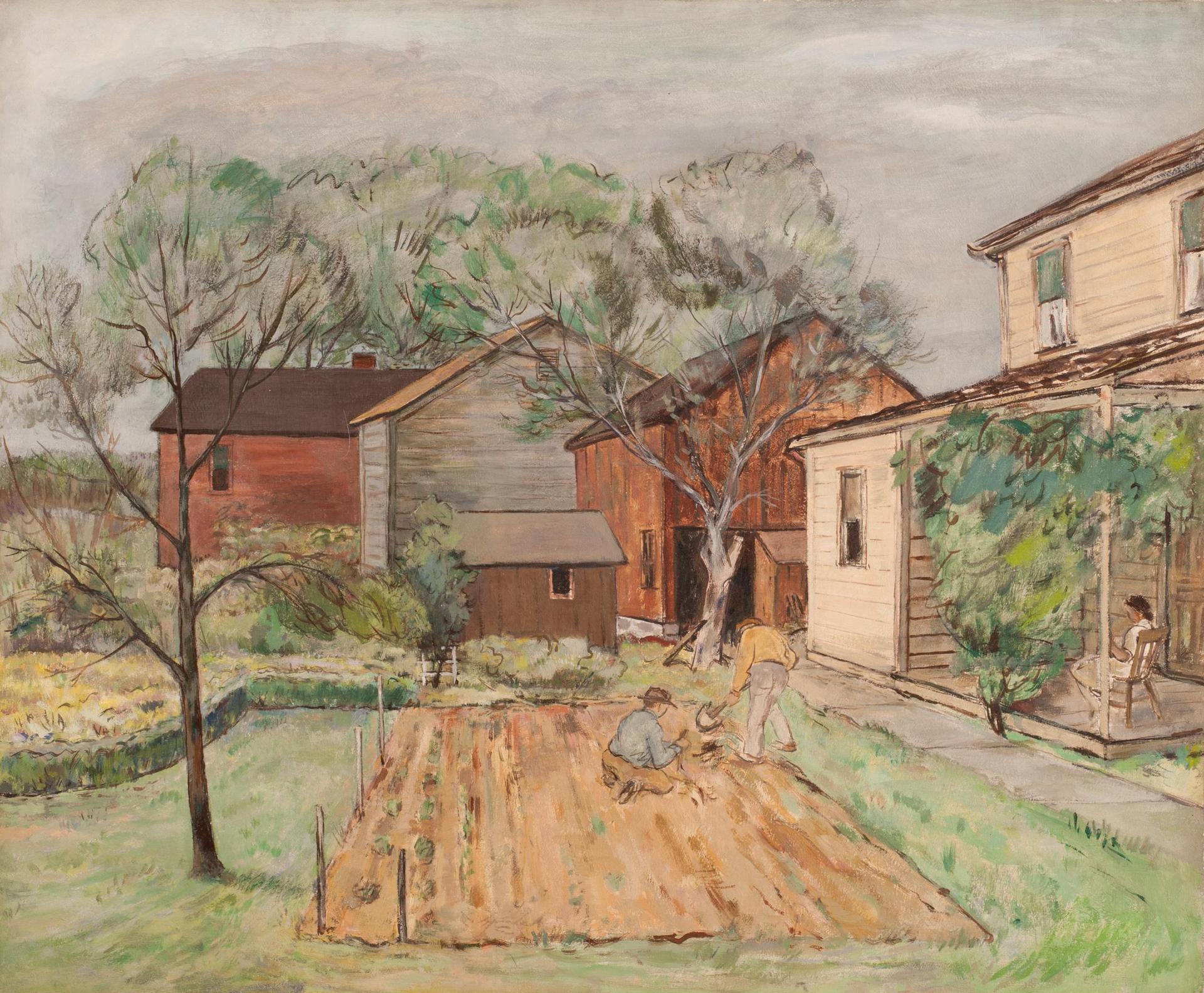 May Painting of the Month
Garden Patch
by Esther Topp Edmonds
Acquired 1949
The Somerset countryside represented here was one of the artist's favorite subjects.  The composition depicts a rural spring scene with new green showing everywhere in the warming earth.  The house and series of farm buildings half enclose the sunlit garden, creating a sense of secure privacy.  Two men are planting the garden while a woman, wearing a dress of the same cream color as the house, sits on the porch.  Ms. Edmonds' time studying and teaching in France is reflected in this work, especially in the loosely painted trees and soft colors. 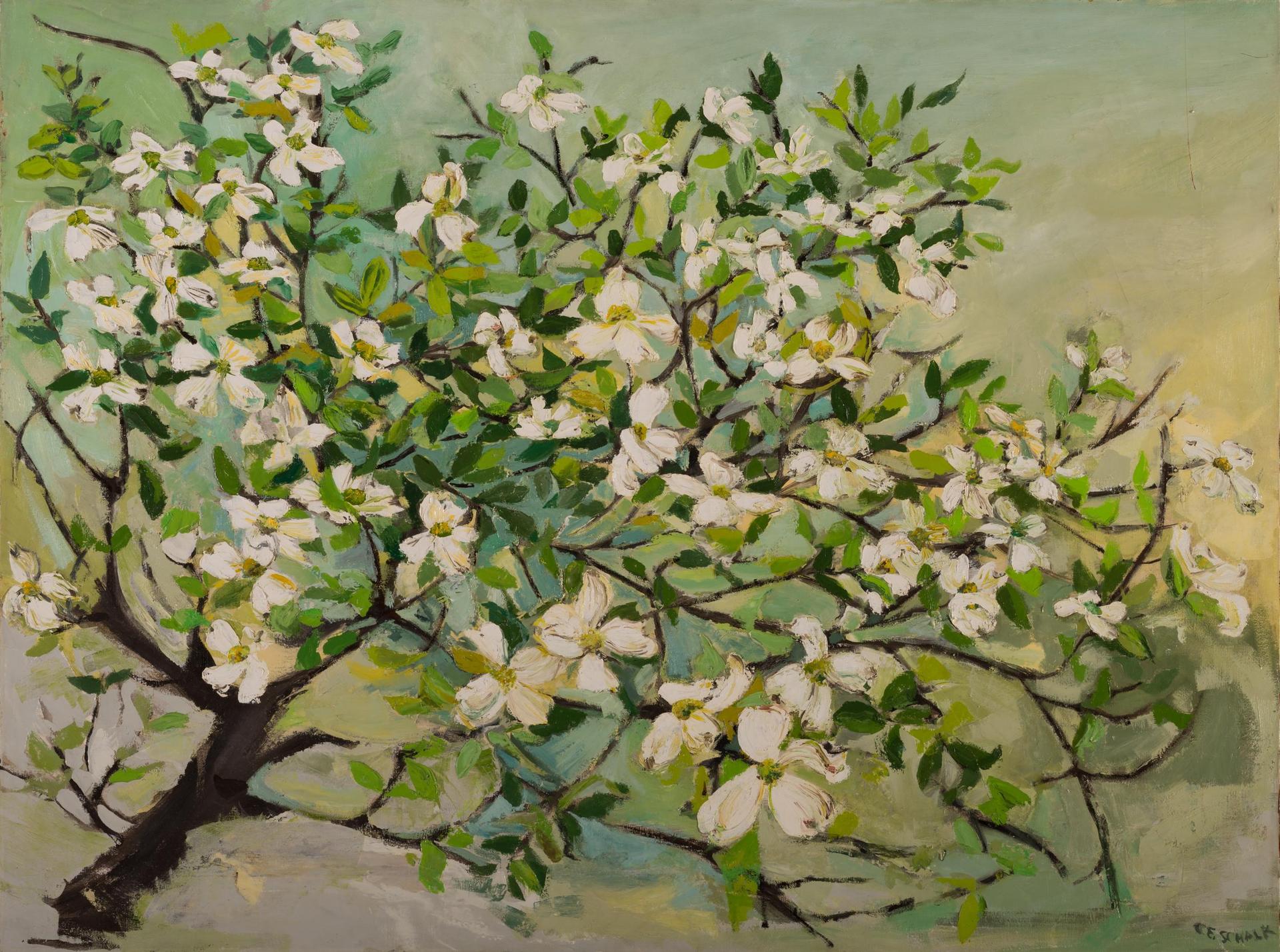 April Painting of the Month
Dogwood
by Carol E. Schalk
Acquired 1966
This painting, with its dogwood branch in full blossom against a partly sunny sky, evokes the essence of springtime.  The artist caught the moment of full glory before green leaves replace the flowers.  She depicted the flowers realistically, including the center crown of thorns and the tips of brown-red on each petal.  She designed the sky so that the viewer's attention is drawn to the heart of the canvas.  An area of cerulean blue in the center accents the leaves and flowers in that area and provides contrast to the soft pastel clouds that surround the branch. 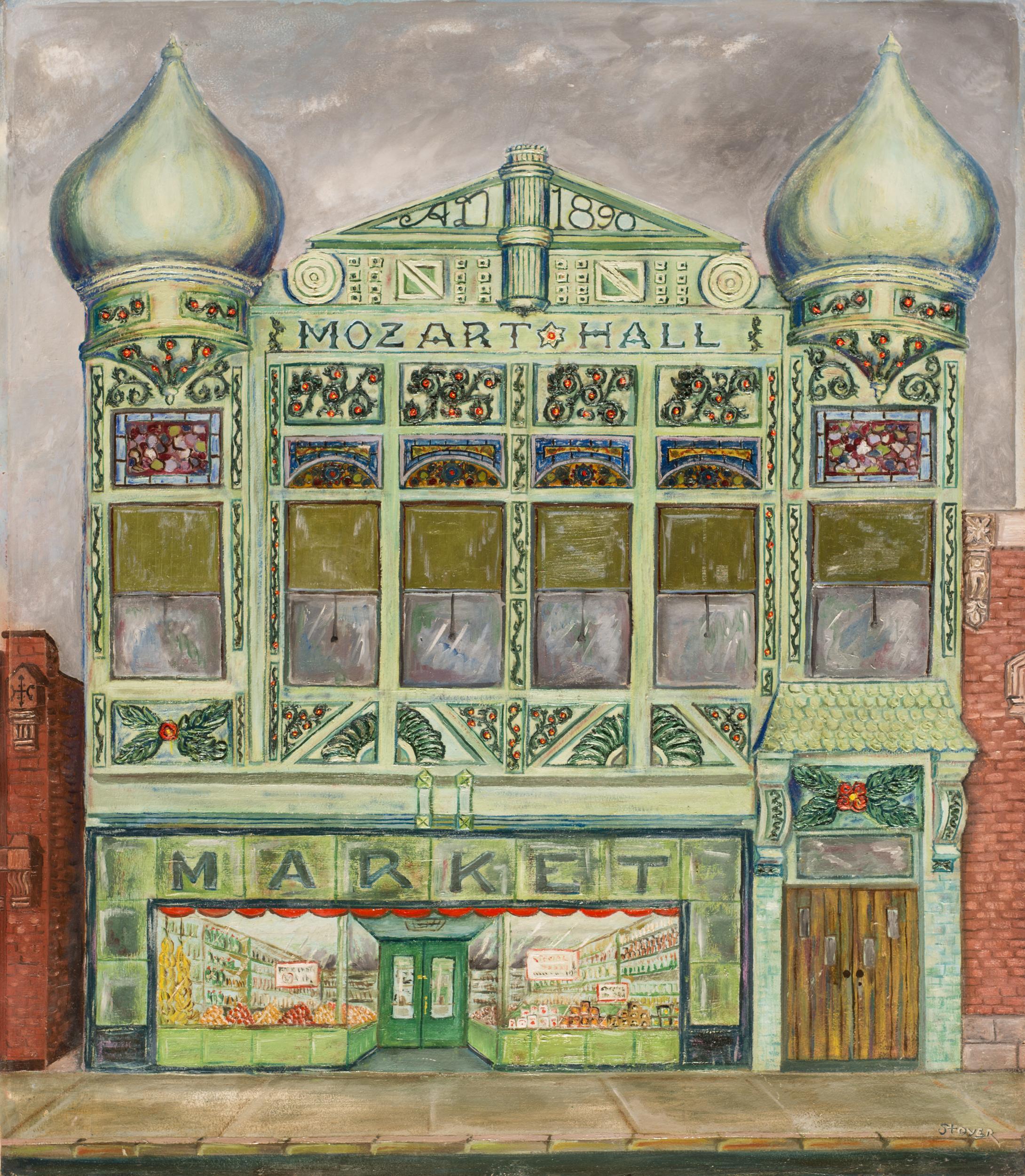 March Painting of the Month
Main Street Relic, Latrobe
by Clare G. Stover
Acquired 1955
Mozart Hall, an architecturally interesting building in Latrobe, is depicted in this realistic work.  The building was erected when George Seiler, a fancy meat dealer in the late 19th century, decided that the community needed a magnificent hall for social activities.  He hired a Pittsburgh contractor to build this one.  The artist carefully executed the intricate designs and colors impressed in the metal facade of the building.  She captured the contrast between the ornate decorations of the turreted structure and the prosaic grocery market at street level.
February Painting of the Month
Old Lady
by Theodore Allmendinger
Acquired 1941
This elderly woman, with a rural Pennsylvania winter landscape at her back, gazes steadily at the viewer.  Her portrait is realistic with glowing flesh tones and eyes that hold the wisdom of age.  Her shawl and head scarf are skillfully detailed; the artist seems to have woven, rather than painted, them.  The woman stands in the very center of the painting with her body and head forming an isosceles triangle.  This shape is repeated in the roofs of the building behind her.  The entire work is done in shades of black, white and brown with the only exception being the touch of bright green on the porch railing. 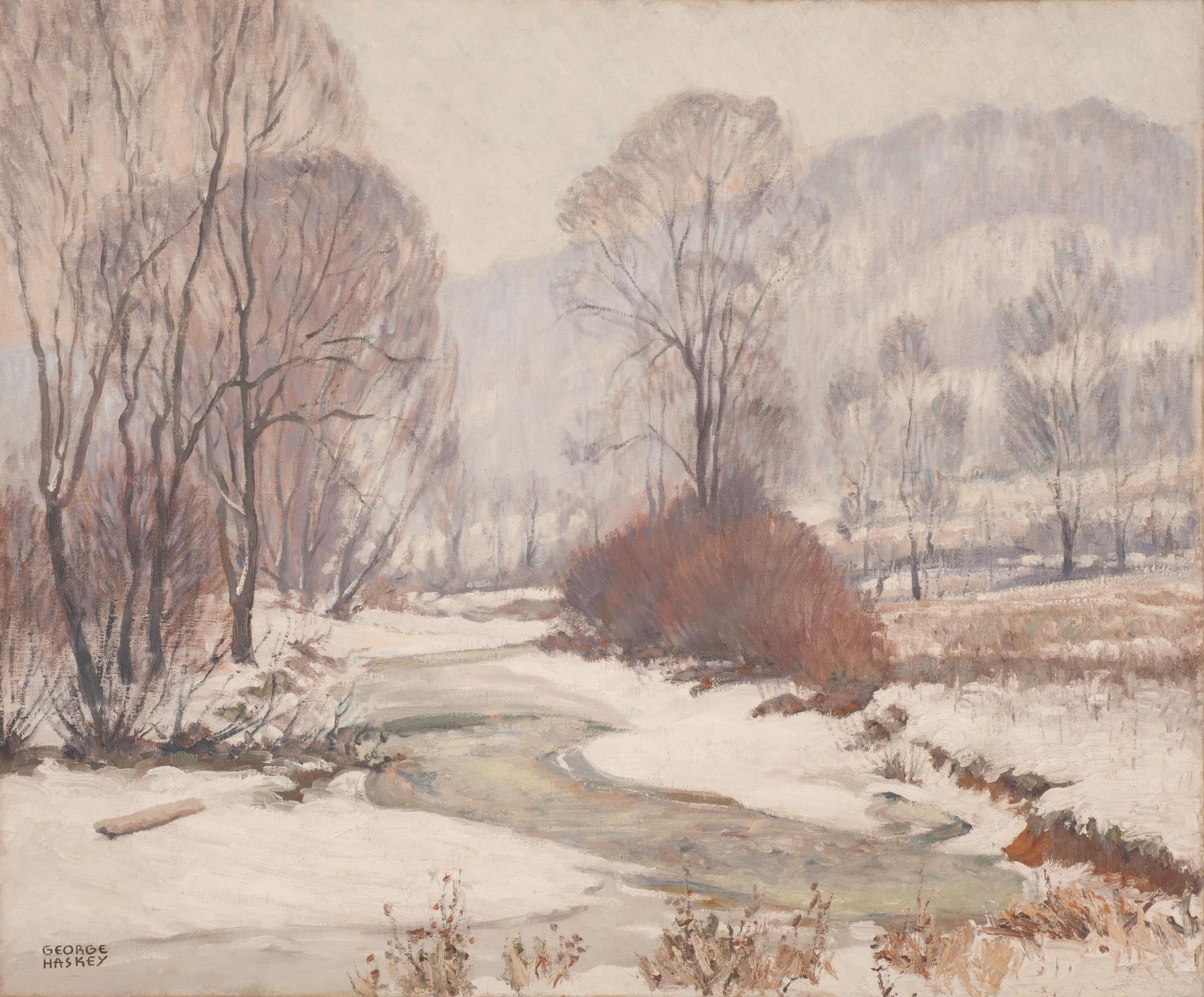 January Painting of the Month
Winter Stream
by George Haskey
Acquired 1938
Winter Stream is a realistic interpretation of a forest snow scene, done in the style of the Barbizon School.  The artist understands light and uses it to create the misty atmosphere that outlines the bare tree branches and dry grass stalks.  The mood of the composition is one of peaceful equilibrium.  The bold trees to the left gracefully balance the vegetation that fades away to the right.  A meandering stream gathers all the soft browns and grays of the painting and brings them to the foreground. 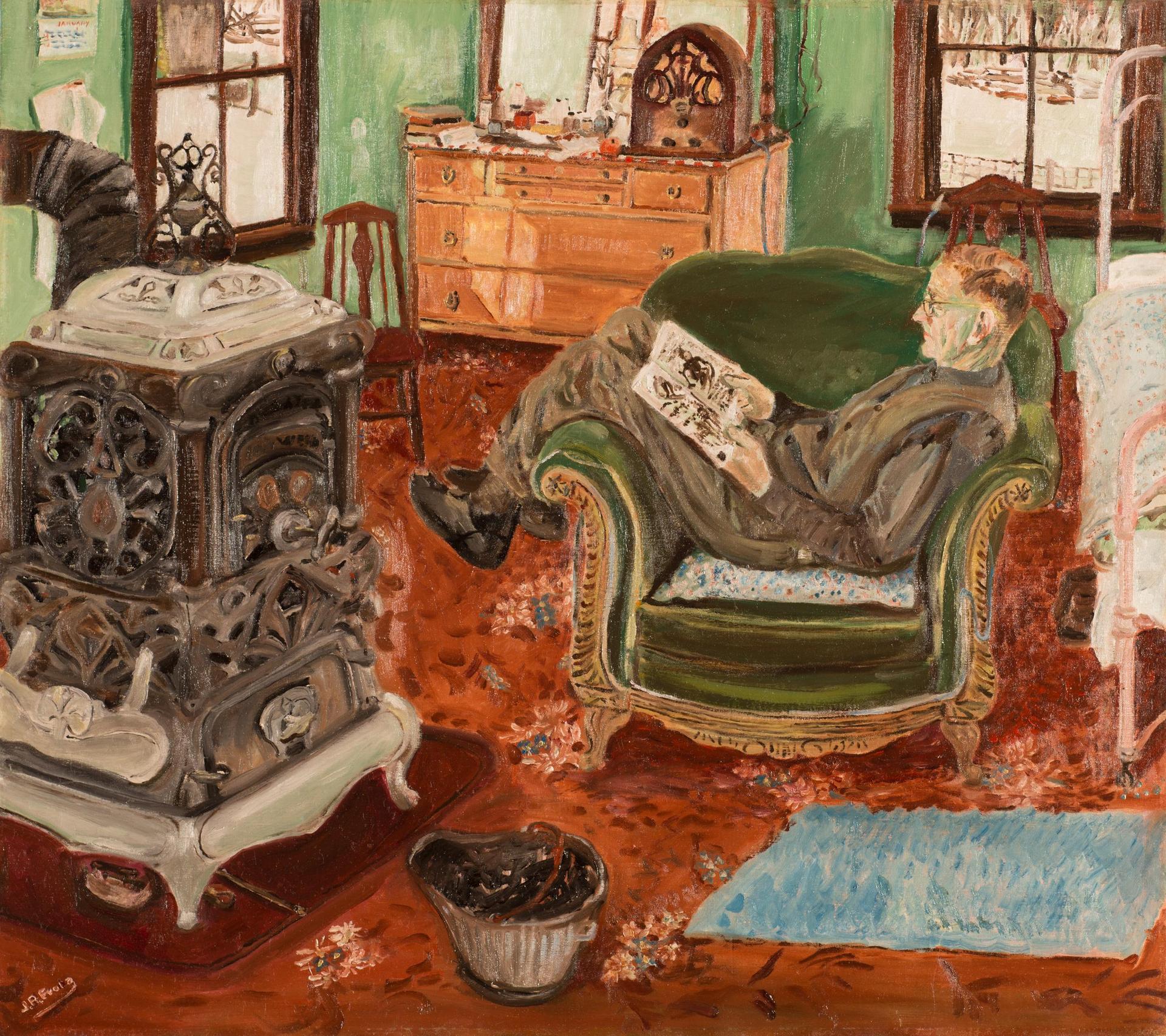 December Painting of the Month
The Lazy Chair
by Joseph R. Frola
Acquired 1948
The artist painted this portrait of his bachelor neighbor who had told Mr. Frola that he spent the long winter days just reading and sleeping in his chair.  Everything in the picture is designed to show the warmth and security of that home;  an old stove with a bucketful of coal nearby, the overstuffed chair pulled near it, a cheerful flowered floor covering and the exterior snow scene from the window to remind the viewer of the harsh weather outside.  Although the old bachelor lived alone, he remained in contact with the rest of the world through his radio and newspaper. 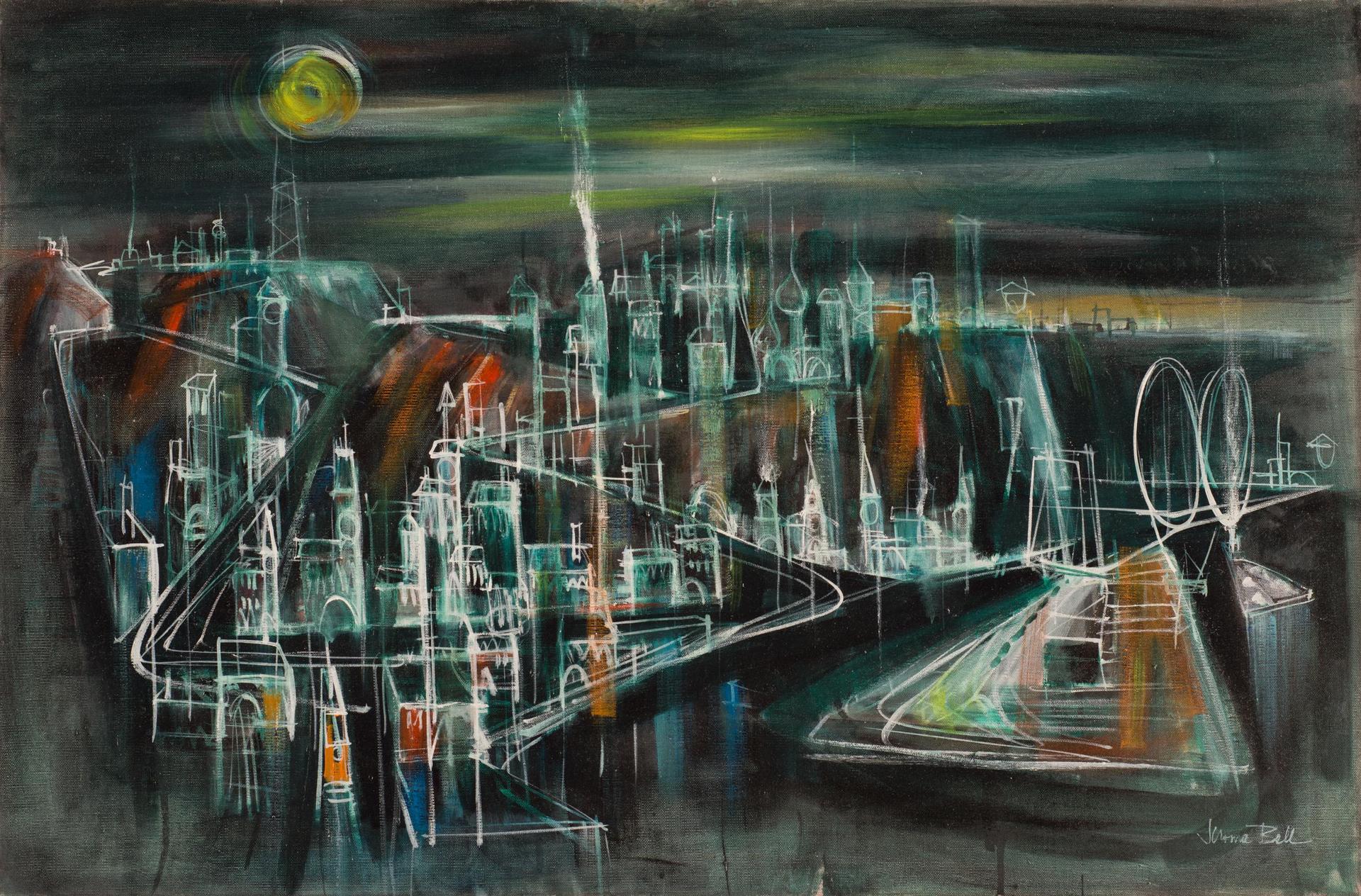 November Painting of the Month
City of Night
by Jerome Bell
Acquired 1953
The artist used a surrealistic approach in his presentation of a night view of a city.  At first, the painting looks like a brightly lighted amusement park; then, at closer study, the viewer begins to see outlines of buildings, white ribbons of roads and a dark river.  Near the center of the work is a small onion-shaped dome that may be the Pittsburgh church familiar to motorists who travel the parkway.  Bell used a staining technique to apply his paint in very thin layers, resulting in a smooth finish devoid of any texture.
October 2020 Painting of the Month
Charge!!
by Virgil D. Cantini
Acquired 1947
Power and movement are the dominant characteristics of this portrayal of a football play.  In the style of German Expressionism, the artist outlined the figures with a heavy black line as if this were a coloring book.  A dark background contributes to the illusion of the figures thrusting forward out of the painting.  Conflicting forces collide in the center as a blocker clears the way for this teammate with the football.  The players' faces, in the days before protective masks, show the intensity of the game.  The number on the jersey of the ball carrier even looks like the word "GO". 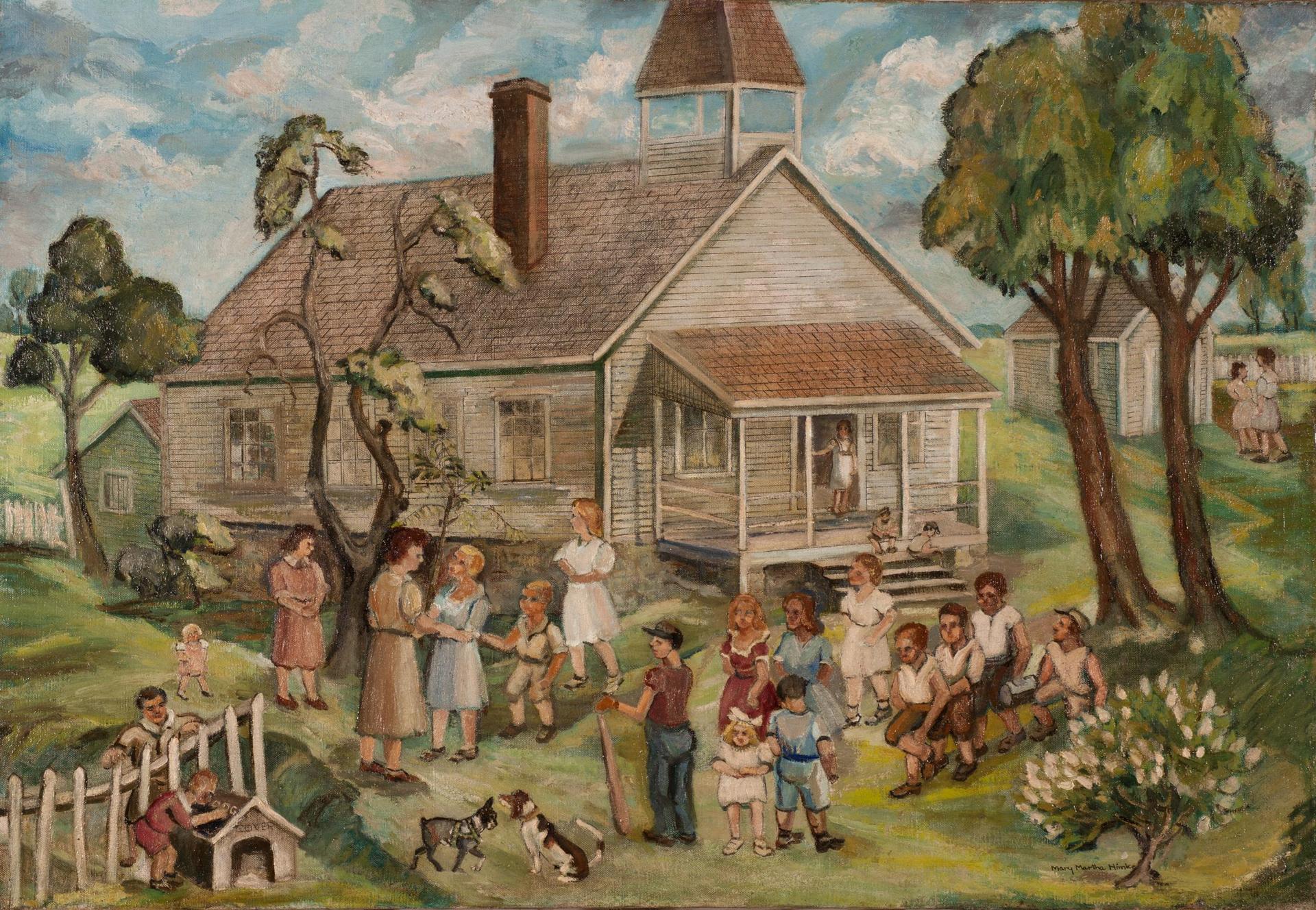 September 2020 Painting of the Month
Recess
by Mary Martha Himler
Acquired in 1942
Recess, the fourth Himler in the collection, is the only one of the works to include people.  This painting is full of life as it depicts a scene Miss Himler recalled from her first teaching job.  A one-room schoolhouse and its two necessary outbuildings provide the background for a busy group of children, their pets and their teacher.  The trees and fence curve toward the figures.  Only one child stands alone; the girl in the doorway of the school gazes pensively at the activity in the schoolyard.
August 2020 Painting of the Month
Greywing Manor
By James R. Beatty
Acquired in 1951
Greywing Manor, owned by the Steele family at the time of this work, still stands in New Alexandria.  The artist was interested in the unusual composition of an old apple tree in from of an English-style country home.  The house and sky are a pale flat backdrop to the dramatic portrayal of the tree whose arching branches stretch from one side of the work to the other.  One limb thrusts forward, giving the illusion of invading the world beyond the painting.  The impasto work on the bark is unique; it is so thick that pieces of bark seem to lift from the canvas.

July 2020 Painting of the Month

An art seminar in Maine led the artist to discover this little fishing village while sightseeing.  The impressionist seascape achieves a sense of stillness and harmony with its play of soft tones in light and shadow.  Weather-beaten houses of various pastel colors and fishing shacks scale the hillside leading down to the rocky shore.  Exposed pilings of the dock indicate that it is low tide.  Several seabirds hover and a sailboat is visible near an offshore island but these are the only signs of movement in this tranquil scene.  A little bluebird appears near the artist's signature indicating her hope that the painting will bring happiness to is owner.  Marjorie Laird has long loved the sea.  She and her husband once lived on a schooner carrying cargo in Central America and then moved to Boston with many visits to Cape Cod.